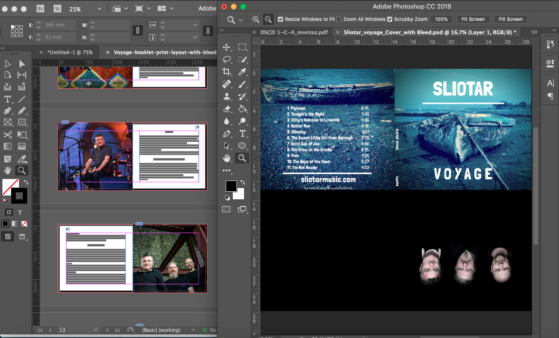 Independent DIY band all the way

June 30, 2018 by sliotar
DIY music videos, How to make a CD cover, Independent DIY band all the way, Sliotar Voyage

It was just past midnight on Wednesday. Once again I uploaded the final files to Dropbox after exporting them about five times in the past two hours. Every time I thought I finished, I found a typo or decided to change a sentence as it just did not quite sound right, or a photo was only a pixel away from the “perfect position”. The new Sliotar album’s cover had me possessed for the past few weeks. When the album is out, you guys know what I mean, but let’s say there are 32 pages of stories and pictures. It’s as much of a short book as it is an album of some of the greatest music we have ever recorded.

Some of you guys might be interested in the technical aspects of design, so I thought I’ll share some of the processes here. If you have no interest in design, skip past this part.

The cover photo was an accidental shot I took of an old boat in Malahide, just outside Dublin on a sunny spring day. Photography is a big hobby of mine, and I always look for images to capture. And it was this photo mixed with the album name Des came up with, we had a concept idea. I can reveal that the album is called Voyage. It was this name that got me thinking about writing some of the Sliotar stories from over the years and include them in the CD covers. We collected few cool photos from our friends from last summers tour. We organiced a photo shoot for some more bio style band shots as well.

I started by making a mockup of the cover (the outside part) using Canva. If you ever need any quick design stuff done, you got to check out Canva! Then once we had a concept everybody was happy with, I started to do the same layout in Photoshop. The problem with photoshop is that it is suitable for individual images, but if you are doing a design for a 32-page booklet, its time to use a page laying program, These are not cheap… And I’m sure you guys understand that we are an independent band, and budgets are tight… But thankfully adobe offers a fully working seven day trial for InDesign. Soo… I had seven days time to finish the booklet… No pressure! I’m down to four days when I write this, and there still has been some last minute tweaks. Let’s hope we get the go-ahead from the printers before my trial runs out, or the price of this production is going to go up a quite bit.

Now it has been a learning curve as always. You see, if you do designs like these every day, you get to the routine. But I only get to do printed material as often as we have a new album coming out. So even when I have a working knowledge of most of the stuff, it always takes few days to get on top of it. I made some mistakes along the way. Once again Tom, thanks for your patience!

Now I hope that all of the work with the covers is finished, and I can move on to the next thing on my never-ending to-do list. Speaking of which, videos.

The only thing holding us back putting out new music

I asked you guys a few times already if you would know any videographers, who would like to collaborate with us, but we have no luck yet. The only thing that is holding us back starting to drip feed you guys new music is the video content. As mentioned above, we are an independent band. All of the money we can muster have gone to the production of the new album, and until that is paid, unfortunately, we cannot afford to pay for big production videos.

Now, this never held us back before. We are big embracers of the DIY mentality in the music business. So I am asking, would you want to contribute something to the videos? I am not talking about money here, although that can be an option in the future as well, but time. Do you have any interesting video footage we could use? Ideas, animation skills, video production skills, cool DIY videos (keep it clean kids!) of anything interesting, funny or whatever you can think, we’d love to talk to you. You can email me at sliotarmusic(at)gmail.com. Here’s a quick reminder from 10 years ago that this is the way we have always done it 😉

OK, that’s it for now. Two weeks from today we will be starting our journey, or should I say Voyage 😉 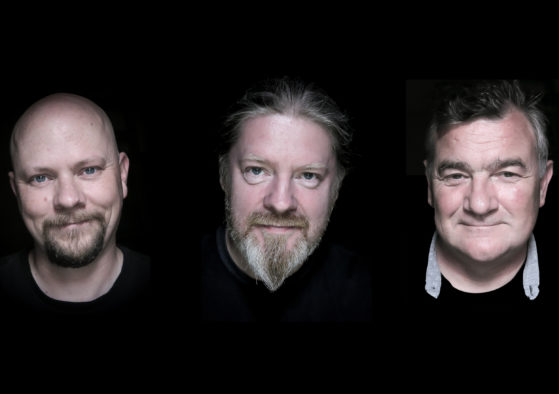 A breakthrough in the Sliotar camp

June 24, 2018 by sliotar
A breakthrough in the Sliotar camp, Sliotar celtic band

I’m a big believer in seeing the good in everything before the bad. But this week has been real ups and downs for me. Balancing my work, my shows and trying to make a dent into the Sliotar’s new album release todo list has taken its toll. We were still bit blocked by the cover design and the printing options. I had a vision of what the cover package of the album should look like. Unfortunately, the options I was getting here in Ireland just weren’t what I had in mind at first. Don’t get me wrong; it would have been fine. But at the back of my mind, I’d still be thinking how I wanted it to look like. Luckily though, we had a breakthrough in the Sliotar camp this week.

I know all of this sounds a bit cryptic, so let me explain. The new album, will not only be full of great music, but the package will have 32 pages of stories from the Sliotar past, present and the future. We feel the stories go well with the music. Besides we want to offer as much value as possible for those of you who still buy music in physical form.

But a few days ago Tomas came to the rescue. For those of you who don’t know, Tomas somr has been working with Sliotar for the past 15 years. He engineered, mixed and helped us produce the new album. He had been looking into printing options in the Czech Republic. It turns out they can do exactly the cover I had initially in mind. Once again I find myself thanking Tomas. I’m still waiting to get the exact print specifications, but we are nearly there.

Speaking of Tomas, he is working on his own album at the moment. During the week Ray popped over to Denmark to add some Uilleann pipes to Tom’s new album. We are big believers in collaborations and helping our friends. So many artists forget to look outside their own projects. What you put out in the universe, will come back tenfold in the future.

I am still looking for videographer both in Dublin and in the Czech Republic, who would like to collaborate with us on some new videos for the songs from our new album. We really want to promote some talented video artists. It would be great to connect with some great artistic minds. If you can help email us at [email protected]

And I suppose it goes without saying that we are only three weeks away from that special time in the Sliotar calendar when we pack our car and take our Celtic music on the road. Read more about the Sliotar 2018 Summer tour HERE. Keep it Celtic guys! 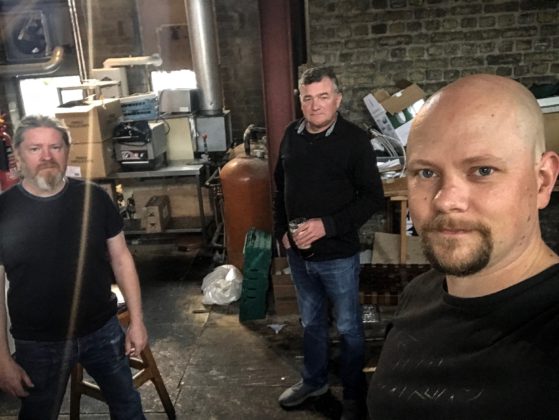 Yesterday was our four-week countdown for the tour. By now in four weeks time, we will be well on our way. Still so much to do to get everything in order before we go.

Yesterday we did a photo shoot for the new album. We have done most of the cover package design, but we needed some recent shots of our silly heads. Time was limited and the opportunities to get the pictures taken were limited. But often pressures like these are the best way to get stuff done. Oh, how motivational of me…

We also played two shows this weekend at our home venue The Porterhouse. Right now every show is chance for us to tighten up the set for the tour. We are very excited for you guys to hear the new material. Not long now boys and girls. If you haven’t done so yet, do us a favour and sign up to our Sliotar Clan HERE. Keep it Celtic guys!

P.S. That photo on this page is not a take from the photo shoot, just a quick behind the scenes shot on my phone. 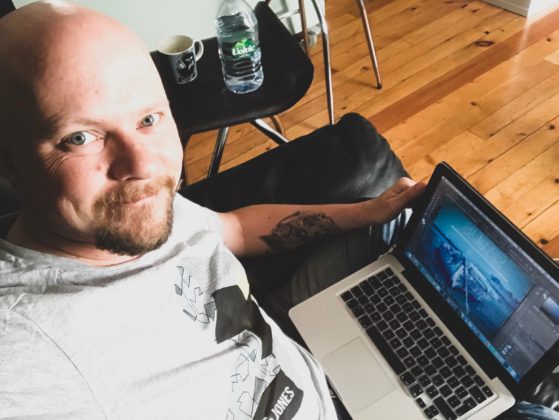 Working on the album covers

Hey guys. I am hoping this will be first of many more regular updates. Those of you who know me, know I am incredibly busy. But as the new Sliotar album is nearly here, it is time to up the blogging schedule on our website. We also want to keep you guys more in the loop of what’s happening in the Sliotar world.

So for the past week has been a busy one. We got to hear the final mastered version of the album, and it sounds fantastic! I know I will be repeating myself in the next weeks and months to come when I say we believe this is our best album so far. It is not out yet, but we are already really proud of it.

I took few days off to work on the covers. We have some great ideas, but it is turning out to be a challenge. You see, the cover booklet will include more than just the track tittles and the credits. We wanted to share with you some of the stories from over the years that somehow explains what Sliotar is all about. We want this album not only be music but an experience. And trying to fit all of this into the booklet is turning a bit of a challenge. But we’ll get there.

Getting ready for the tour

Also, the tour preparations are in full swing. One month from today, we will be on the road. We are practicing the live versions of all the new material, setlists and getting all our equipment in order. We are very excited about this summers tour.

From time to time I will ask for your guys help in these blog posts. If you think you can help us, let us know. Or if you think you know someone who could help us, please share this blog post with them. Today I am looking for Videographers both in the Czech Republic and in Ireland. We want to capture as much video footage from this summers tour, and if you are a DSL videographer, or just do it for the fun of it, get in contact with us. We also want to make some music videos for the new album, and we’d love to find few videographers in Ireland who could help us. If you want to help us or know someone who’d be up for it, email us at [email protected]

That’s all for today. Keep it Celtic!